Singh is King is by any definition a masala movie, all set to spice your weekend family outing. Akshaye Kumar, in my opinion, is one of the most under-rated actors of Bollywood, rolls in plenty of laughter with his natural Punjabi good looks and good humor, calling morning cereal as "Doodh and chewera" and quips thus, when Katrina shows him a nice, tiny halter top for her to buy, "Bachay toh aik saal baad hongey, abhi se shopping kar rahi ho?". Om Puri is the other villager who accompanies him to Australia where Sardar-gang-mafia head "Lucky Singh" is blowing everyone to bits. Enter "Happy Singh" (Kumar) to bring the don back to his parents in Punjab where they cry and pine for him. 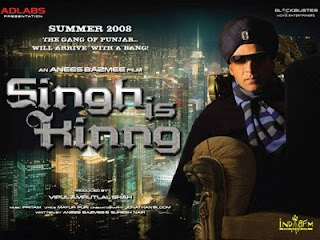 It's got everything, in good quantity and quality, that we look for in an entertainer. A beautiful, tastily dressed heroine, corny-yet-laugh-out-loud humor and a centre star who has the capability to carry off nonsense drama as well as thrilling action sequences, such as jumping from two lifts to an escalator. Bravo.

But. I've decided I'm not going to write about how beautiful Katrina looked, how Akshaye Kumar is akin to wine (getting more and more productive and fruitful as he grows older), how Neha Dhupia's wardrobe was breathtakingly classy and how Bollywood will continue to rule hearts even if the hero is a rooster-chasing villager to a gang-mafia-king.

I'm going to talk about the magic of CINEMA.

Jokes that are ordinarily quite unfunny will seem hilarious. Women who might sound sheepishly American will look adorable. Dance numbers that would on any other occasion leave you wondering what they were doing smack in the middle of a fight-sequence, will make you jig a bit in your seat.

In the past given years, cinema has declined in Pakistan due to various reasons. Bad filmmaking being the topmost one. And then there's evergreen Saima who refuses to move a day beyond 16, who also, according to my friend, if jumps in a sarsoon ka khet, they won't have sarsoon for years.

Then there's Shaan. The terribly misplaced soul. I'd like to see him as Brando. And he insists on dressing up as Maula Jatt.

Too many people have had too many debates about this issue: why not the revival of Pakistani cinema? There are factions of society that refute it as much as they possibly can, considering cinema the work of Satan and the core cause of the downfall of any civilization. I'm guessing they're forgetting corruption, bhatta, cheating, bribery, adultery, rape, prostitution, child-molestors, robbers, dacoits as their top contenders. Ah, well.

Then there are factions who are remotely interested in it as a business proposition, watching it fare with the masses. Now that they see people are duly bored with cable television and Star Plus (fingers-crossed), it's time they seek other methods of entertainment. Cinema seems to be the next best thing and I can see the tide turning. Singh is King was sold out, advance booking, on Sunday afternoon. That's why I had to go see it today.

And then there are suicide bombers. But they haven't spared hospitals, mosques and army cantonments either, so cinemas don't have much of a fighting chance against those odds.

I can't say with much assurance that I'll like Meera shaking her groove-thang on a big screen where I saw Katrina batting her beautiful eyes at a man 20 years her senior, but I can definitely say that if they produce more movies like Khuda Ke Liye, I'll definitely go watch.
Wrote Majaz at 7:33:00 AM

But yes, I totally agree with the magic of cinema! And from your review, it certainly does seem like Singh is King is a great movie! Now I wanna go see it!! Sounds great!
Glad you had a good time! :D

Trust me, you haven't seen the rest of the Pakistani movies to know how different KKL was. It had its pathetic moments too but it was definitely a good shot by Pakistanis in the arena of filmmaking.

Really lol.. well yeah no wonder then, 'cause I hvnt' seen other PK-made movies lol