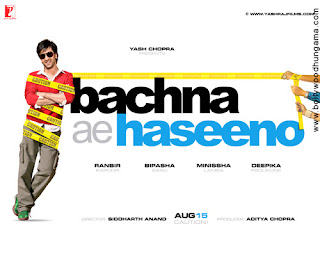 There were only two good things about this movie.

Ranbir Kapoor and his acting. He's charming and refreshing. He's learning the ropes of being a chocolate-hero and so far he's doing pretty good!

Okay, so technically that's just one thing but that's the best I could do. I frankly don't know if this movie did any business whatsoever but it's plotless, themeless and seamless. How am I supposed to be interested in a roguish Don Juan who breaks hearts in half of the movie and tries to mend them in the other half? Originality, hello?

Stellar-casting can only take you so far. Deepika needs to understand some of that philosophy too. Looks can only be a bidding factor until you're in a masala movie like Om Shanti Om. When it comes to at least some amount of acting, she needs to see some movies without women-drenched-in-makeup. Maybe Shabana Azmi or Smita Patel flicks will do her good.

Minisha Lamba is actually not half bad, even though Bipasha certainly is forgetful, as all item-girls are. The Italian model sequence has 'we-needed-pretty-sights-apart-from-Basu' written all over it, so good for those who want to see Italy and Bipasha.

The direction is sloppy, though the dialogs aren't. Ranbir is going to make it big. All he needs is another couple of box-office hits and a critically acclaimed pack of films and he's set to elbow Hrithik and Abhishek out.

So all in all, basically just another Ranbir flick.
Wrote Majaz at 9:22:00 PM

Hahaha,
I liked the movie for Ranbir, Swiss visuals, Italian scenes, and Australia.

I wanna watch !
lol
How in the world do you get enough time to watch all these??