Okay, Hira and I are still not over the shock of someone, who has been charged with a plethora of corruption cases, being nominated for the next Presidential candidate. But maybe that's just us, you know, the parhe likhe jaahil who don't know how politics work.

So we try to absorb this piece of news and we keep trying to understand how this works.

BB comes and becomes popular immediately because she's the daughter of an immensely popular leader. She commits follies that are to be expected from any ol' political heir and then decides to marry a guy who looks like this: Really. Even if character or wealth is something to go by, she could've done better. Why didn't she meet someone at those yuppie colleges she went to? And marry a prince of some unknown island? It's pleasant enough food for thought what that could've saved the country from in the oncoming years.

She had to marry a guy who looks like this: 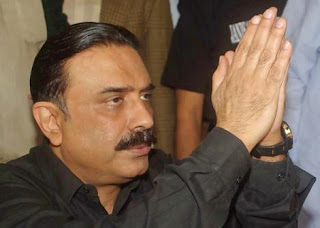 So okay. Love is blind or whatever. Or the political imperatives to marry him were especially crucial to the prices of gas and electricity and flour in Pakistan in the year 2008.

But how is it that this fellow is claiming that people have never believed that he was corrupt? Not for one second? Does the word corruption mean anything to him at all or does it fail to lose all sensibility ... the impact of it in the global politics fail to have any semblance of logic?

Currently, it is estimated, that Mr. Asif Ali Zardari has more than 900 million pounds or 1.8 billion US dollars or even more. His estates range from Phase VIII DHA to Virgin Islands and that's just scratching the surface.

What this country refuses to understand and accept is that we are consistently letting idiots, corrupt politicians, militant crusaders and fundamentalist agendas ruin any chance of peace and quiet that may come our way.

PLEASE make me believe I have something to hope for in this nation.

Hira and I are terribly desperate here. Please.
Wrote Majaz at 8:39:00 PM

filed under Photos and Videos, The Politically Correct

This has to be the best (not to mention the most hilarious) Zardari-bashing I have read recently. I know that saying what I just said won't help you and Hira in becoming less desperate, but just wanted to mention it anyway.

Also, if you do find any hope, please forward it my way as well. Meanwhile, I'll make sure that everybody in my email address book receives the permalink for this post.

God, I am still laughing at "She had to marry a guy who looks like this".

COME TO MY PAGE FATAFAT.
GOT SOMETHING FOR YOU

Okay. Saadat brought me here, and I have to go thank him, because seriously, the humor aspect aside, I have never been able to get over the fact that Benazir, who when I was a child, was THE Aishwarya of the times, and then she went and married THAT!

The question is why?

Love is blind they tell me, but there are other senses, and how can someone that repugnant not register on any of the other senses... I mean seriously, she wasn't deaf, was she? She had a perfectly working nose!

Why are WE that unfortunate?

Enjoyed ur piece. By God, the hatred is brimming over the surface, but it is suitably laced with humor. I too hated him, and always wondered why she, of all the people, had to marry this(as you put up) of all the beings.
Well more than love, or deafness or blindness it was a political convenience I guess.

Hira and I have both been told we get funnier as the misery mounts, so if feul prices continues to rise as they have, and electricity continues to remain a once-in-a-day blessing, you'll be laughing a whole lot more. Hira and I both graciously accept your praise and have outlined you and all our ardent humor-admirers to the exclusive list of people who will be invited to join a club. What is the nature of the club and what it'll do is still unclear to us for the most part, but you get it right? We're thanking you.

You're such a sweetheart, I read the post and I'm going to reply asap.

Wait till you see our next bashing. PM Gilani and the City of (Disappearing) Lights.

You should not only thank Saadat, but you should also read Hira's post on what she's going to do when she becomes PM.

I have all my sympathies with BB for being a dead woman with three children and all, but I do not sympathize her for making crores and crores outta the country during her reign. We aren't unfortunate. We are apathetic. We are stupid. Misfortune is the earthquake that hit NWFP and Kashmir and Punjab. Misfortune is Hurrican Katrina.

Marrying a pimp-looking dacoit, as Hira and I have fondly labeled him, and then upping him for President by your own death ... is sheer idiocy.

Glad to have you on my blog. Enjoy the sardonic, sometimes-truly-pissed-off humor. And I suggest you also check out Hira's blog frequently as well.