One flew over the President House.

There is absolutely no doubt that Pakistan is in the hands of the insane.

According to the Daily Dawn of the day, Asif Ali Zardari, PPP-poster dude, was examined by British and American psychologists during his imprisonment. Psychologists chiefly diagnosed him as a patient of dementia, post-traumatic stress disoder and major depressive disorder. The prognosis was bleak since he was not expected to recover any time in the year or so (this was stated in 2007).

So what if a guy's insane. He can still be president of our country. On humanistic grounds. 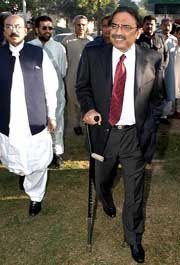 We're way ahead of them. We've got the certifiably insane as Presidential candidates.

You can't beat that, no sirree.

Our High Commissioner has been reported to state that Mr. Zardari is fine now and was 'impressed' on how Zardari dealt with the trauma of his wife's loss.

I'm gonna go out on a limb and say he was counting pretty little birdies in the air.
Wrote Majaz at 7:35:00 AM

how do they say it in those old gangster flicks...?
ah yes...
it's curtains mahwzi, curtains!