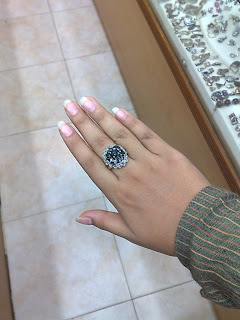 I seem to have begun with a fascination of black stone rings.

Morbid? No not really. That black is morbid is nothing than an old wives tale to me. I'd wear it on my wedding if I wasn't such a fraidy-cat of all the people I'd shock.

There's something terribly bewitching about them, these black stones.

Ali, from his first salary, has bought me a black-stoned ring (not the one in the picture, though), apparently what you call a black zircon set in silver. Reminds me of Diana's engagement ring, though that was a sapphire.

I'm such a sucker for jewelry. Which is sad, because I had never in a million years thought I'd be.

But of late, I've found myself ogling ornate jewelry shoppes, especially designer outlets, which smirk at me. They say, "Oh come to look at us, have you? Do you have any idea how much we cost?"

Especially diamonds. I don't know about them being my best friend, but they're definitely on to me. Their sparkle is like an allure I can't resist and if they're in white gold, you might as well expect me to start weeping.

It's odd. How could rational people act this way? Reminds me of that ayah in the Quran. We've instilled in men the love of gold and land and sons.

filed under Photos and Videos, Ruminations

nice ring :)
and where's the pic of the ring that Ali has bought for you?

I'll be posting that pic soon too!