The end of an era.

Pakistani politics are just about to be turned into a play. "Kionke General bhi Kabhi Sadr tha".

That's how Star-Plussy we've gotten. Governments coming back from the dead (literally), external control and influence (I hear you, Uncle Sam), evil (come on now, really?) dictators bidding their goodbyes and saving graces, inflation being the key factor of all the masses that will finally bring us to a grand finale of this drama we call democracy ... we're all set. 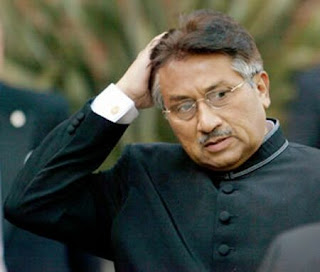 In what can only be called a charade of musical chairs, another dictator finishes his long line of policies that were undemocratic and in a lot of ways, insipid to the future of the nation. Nevertheless, as the popular opinion goes, Pakistanis have a knack of being apathetic and listening to the loud, whip-bearing, tongue-lashing ones.

Let's face it. We don't like democracy, no matter how badly America wants us to like it. Pakistanis are more interested in getting their electricity and phone bills under their tiny (thanks to the currency devaluation, getting tinier by the minute) budgets. We will not take affirmative actions because Pakistanis have an enduring historical pattern of listening to the unjustified voice of the times.

Ah, Pakistanis. Where do we draw the line to irrational hope?

And here we are again. Celebrating.

In the nine given years of President Musharraf's regime, in the six months of the democratic government, in the past 24 hours of a President stepping down.. how have Pakistanis reacted?

We have sat, shocked as always, as the dramatic developments of the stage that is the National Assembly, the script that is the Constitution and the actors which keep having plastic surgeries. Masked puppets dancing at the same tune. Corruption, lalalalalala, corruption.

This man who has just stepped down is no different. I have no sympathies for a head of the state stupid enough to sack a Chief Justice (even though it was constitutional), impose emergency for no apparent reason, make a mess out of a mosque issue and basically be stuck between a rock and a hard place for what seemed like a perpetual period of time.

I don't know about the future, but I do know this. Pakistanis need more than just a change of players. What happened today was not the end. We've only seen a bit of the tumult that is to follow in the next tidal waves of episodes.

Who needs soap operas when you've got a state to dramatize.
Wrote Majaz at 2:10:00 AM

Er, shouldn't it be "Kionke Sadr bhi Kabhi General tha"? Or am I missing the point here? :/

We are one hell of a nation.

May God be with Pakistan. Ameen.

We definitely are one hell of a nation. Today I read that a guy died after listening to Musharraf's resignation.

How? He was a diabetic and he ate too many sweets in jubilation.

Amen to you too.

What do you foresee?

Let better sense prevail for the sake of our people living on the other side of the false line that was drawn 61 years ago.

I hope so too.

"Who needs soap operas when you've got a state to dramatize."

spot on majaz!
I remember the same happened as people rejoiced the departure of Nawaz Sharif..they danced on the streets & distributed mithais..nothing has seemed to change as Nawaz Sharif & his allies are back in power..it could only get worse from this point onward!

They think dancing makes it all ok.

Well. They can dance all they want as Zardari comes.

najanay logon ko kaisay sab kuch bhool gaya hai? have they forgotten everything or apart from Zardari we don't have anyone else to lead our country? i wonder!

We can forgive and forget anything.

And i have to agree with you on this point..hum sab jaantay hain..sab pata hai hamain..we've been through all this but still we haven't learned any lesson!
Pakistan ka khuda he hafiz hai *sigh*

The forces of corruption are too powerful against knowledge right now.

We can only hope for a better future.

There must be a way out no?
We can't give it up that easily especially in tough times likes these..there are so many people who are against this corrupt system but still we haven't been able to do anything about it..how come we've become this much insignificant hmm?

There are many many reasons. A lack of leadership, national interest, strong cultural ideologies that stop Pakistanis from being Pakistanis, illiteracy, poverty ... there are plenty of things plaguing the nation at the current moment..