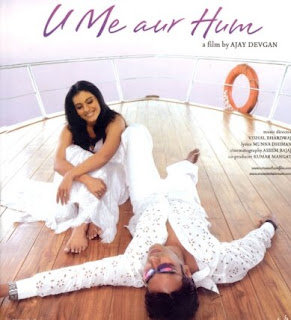 "A" Ajay Devgan Film. Bad grammar always gets on my nerves.

Kajol's pre-marriage makeup. She looked older, weirder and not really pretty at all.

The length of the movie. Despite the intensity of the plot, it could have still wrapped itself a lot earlier had it not been filled with needless songs and dance numbers.

Devgan's directorial debut makes a good impression, the film gets gripping once we get past the whole hook-up phase and I don't know if it's marriage or Devgan's talent, but their as co-actors they work beautifully. Kajol's acting was great as always, which proves that you don't have to look like Barbie and you don't need to have a perfect Ken to deliver a good performance.

The fact that it makes best use of the new 'psychology is in' theme that is rampant in movies nowadays. After "Taare Zameen Par" and "Bhool Bhulaiyan", "U, Me aur Hum" thankfully doesn't disappoint.

Favorite high points included Devgan's interesting cuts and shots, his "It's always about Me" speech, Kajol's candor-filled and post-intermission performance and a solid, well-delivered, integrated storyline. Despite the charba.

I love hindi songs!Check out freehindilyrics.com it has awesome lyrics from thousands of songs.