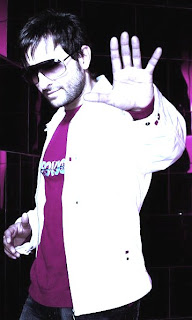 I'm just not going to waste any time telling you what a crappy movie this was.

Rife with absolutely needless latkas and jhatkas from the likes of Indian babes, this story had nothing but spin and substance that you could have gotten from any cheap weekend action thriller starring nobodies and somebodies. The hype existed because Saif is in great vogue, Katrina Kaif is of course a great motivator for the other half of the audience and Bipasha Basu fans will probably roll over and die after watching this flick.

I find Akshaye Khanna to be one of the most under-rated actors of the Indian film industry right now, he has time and again proved with his range of roles that he can do more than just be the muscley muppet that the epitome of Indian heroism is supposed to be. He portrays well the character of the obsessive, jealous, conniving brother and Saif, had it not been for his rugged look, would have been paled in his performance.

As far as Saif himself is concerned, everything seems to be working for him these days. He can play a cook, a nincompoop and Iago and still be loved. So let his star shine, but if I had to give him one simple suggestion as a member of his wide audience, I'd ask him to drop the Brando act. Huskiness can only go along till Amitabh in his emotional speeches. Not for business tycoons, who by the way not only own cheap phones (a K750i) but also go out to blow up their enemies on their own (poor darlings don't have any henchmen at all to do their dirty work, the dears!). Anil Kapoor and Sameera Reddy's sloppy fruit-eating humor leaves much to be desired, and I wonder who's really to blame for these stupidities. The audience or the directors?

The story seems ripped off enough, and the direction still has a long way to go before it reaches the summit that directors think they've reached everytime they make movies with big budgets. Thrillers or action-packed flicks don't always have to involve a high-speed chase or women dancing in discoes (although that does seem quite the formula), it can also be as creepy as "The Others" and as riveting as "Sixteen Blocks".

A relatively better film for the Bollywood bunch, but third-rate and just another ordinary pot-holed flick with eye-candy to smooth rough ends.

You are so right about Akshaye Khanna. He's very underrated indeed.. However as you can see people do recognise his talent, they just don't want to say it out loud for the risk of not sounding "cool" I suppose lol There's little not to like about this guy except perhaps how he spells his first name :P

Saif got a little lucky with the series of recent roles he has had, but thankfully he's now plotting his own downfall. Fills me with hope! :P

It fills you with hope? If anything, Saif's the next Shahrukh.

And it'll take him what, just another decade to become an MP and swipe lands of the Indian people. But then again, being the son of Pataudi, he'd probably choose a different path for swindling people. God only knows what that'll be.

Nah, I know he is hot property right now but I don't see that lasting more than a few years. I say few years because he and the lizard are going to be in the news for one reason or another all this time as well keeping the gossip levels up. Somehow he lacks that X factor of a Shahrukh or Amitabh.

But yes swindle will and how! Both of them in fact. Possibly buy some more of those 20-20 cricket teams, and then perform private dances for them or something. And then charge their own team money for that. I'm evil! :P

Ok, first things first. When you say lizard *still makes me grin though* ... do you mean Bipasha or Kareena (both equally fit the bill!)?

Saif can't dance to save his life, so yeah, even his rougish good looks can't save him from looking like a fool next to Hrithik.

But if you think about it ... I don't think Bollywood-viewers (which includes Pakis and Indies both) are really that cognizant to separate those qualities. I mean look at Shahrukh. The man looks like a Feica cartoon and still manages to be a heartthrob!

Feica cartoon LOL
I wonder what it is. Mass hallucination? I feel just like everything else in life, it also becomes trendy or fashionable to follow certain celebrities or claim they were your favourites. And this is a global trend to be honest.

By lizard, I of course meant Kareena. That square-jawed monster makes me cringe more than all of them put together. Perhaps I'm being rude and unfair. Its funny how the 2 love birds couldn't act to save their lives when they first came in. Ah the advantages of being star kids! 1500 odd films and numerous surgeries later, they are suddenly the bees knees.

Sigh, I wish my wretched luck turned around like that one day!

Feica is a popular cartoonist who is often featured in Dawn. :) If you note his cartoons, they'll definitely remind you of SRK (with or without the power of suggestion which I've just given to you!)... :)

Amen to the global hallucination. To love is to worship images and to follow is to become numb and numberer.

Kareena the lizard, huh. I hated her in every movie that she's starred in .. including her wide-eyed, un-eyebrow-made face in the award shows I watch for kicks ... I did remotely enjoy her in Jab We Met ... which wasn't half bad. In any case, once again, a big amen to 10 years of flop movies in Saif's case, 5 years of needless bootylicious dances in Kareenas, a publicized breakup for everyone and there we go. The ultimate masala - couple.

Bollywood is truly a dream factory. See, you're wishing for such a turn of fortunate events too! :P

Glad you found this blog too .. keep commenting, you make me laugh! :D

Oh I know abt Feica and his cartoons. Just found that reference very funny lol I havnt had a chance to see one in ages though..
Chalo. Enough about these Bollywood divas for now.. gotta save some for later hehe

Ahh, so you do know who he is! My joke is saved, hallelujah!

For Bollywood divas ... plenty more where that came from.. :P