Holding strong to the true stereotyped image of the Muslim world in the international media, here is the story of Laleh Saddigh, the 'Iranian Schumacher' and rebel with a cause to celebrate females in Iran.

Whether or not this woman cheated has taken a background in her one-year-ban from racing. What is now highlighted and publicized is Iran's oppressive regime that forces down the voice of millions of women that are MPs, bus conductors and graphic designers. The emphasis continues on how socio-politically deprived the Iranian women are - especially when it comes to legal rights. They are not allowed to travel overseas or even work without the permission of a male relative and prostitutes are executed if they happen to be arrested the third time. The story doesn't end there for Islam, oh no. According to this 'very-Islamic' society, if a woman is found wandering on the streets, people will circulate all sorts of rumors regarding her character.

Interestingly enough, Lalel Saddigh accepts the charges of cheating in the race, she blames it on the system and says that she was forced to do so because the men would not let her be equal to her in the competition. But of course, that is now secondary. What was previously an intra-organizational feud and a matter of rivarly between competitors and perhaps even a regular case of engine-tampering, has turned into a social issue of feminist agenda, which as always, makes Islamic countries look like an ugly cross between Johnny Bravo and Hitler. 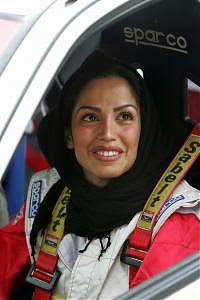 The fundamental questions we've got to ask ourselves is whether these allegations of being 'Islamic' are really allegations at all. And to what extent can these countries be really called Islamic? To what measure do they implement Islam in its true meaning - and to what extent do they use it for their own vested interests? Everyone knows, by now, that any system can be manipulated for personal gains, be it Islam, democracy, feminism, socialism, capitalism, whatever. It's not just a matter of the perfection of system that is liable to create an ideal state, but the degree to which individuals interpret it for the benefit of people and well-being of society. The moment we begin to forget that systems are made to benefit people, and not the other way around, the cataclysms will begin to unfold. Islam, as a system, if aims to achieve a society of peace and well-being, would never want women being beaten up by the police for having their headscarves shifted slightly to an angle of 35 degrees. Thanks to all the fading of lines, through nine-eleven, Taliban, the media, the Islamist, the politics of fear, the tendency of humans to make stereotypes faster than they can process information, we are really now turning into one big fat ugly nation.

The blame? Pointless to question or debate about where that's going to go. I guess it doesn't matter whether or not we question the western society of all the drawbacks of their own civilization or the wonders of a so-called democratic (read = imperialist) nation, because our channels and our people don't speak in the same glorious American and British accents - unless they become ABCDs themselves. We can't fight this tidal wave of stereotypes that is currently making the world go round and round, like a big typhoon, and Muslims seem quite at the bottom of it. If they can manage to grab hold of some Amreeki's foot, then they'll probably be allowed the title of second-rate citizens and climb up a little. But that's just about it.

I sound like an angry Islamist myself, now, don't I? But au contraire. I probably am their greatest holy horror. A woman who believes in emancipation of women as strongly as she believes in God, listens to Guns n' Roses, doesn't understand Islamic imperialism, rejects the obsessive ritualism that makes Muslims more afraid of people than they are of God Himself, believes in tolerance rather than lashes and questions most of the current status quos of society, is anything but.

Which is quite the tragedy. (Hah.)

No distinctions between what is what anymore. No telling who's the engine-tamperer and who's the freedom-fighter. Who's the imperialist and who's the democrat? Who's a female-empowered society and where one-in-every-three females is subject to domestic violence everyday.

It is simply mob psychology to accept images on stereotypes. We like to accept ideas more on the magnificent principles of the angelically good and the maliciously bad, when in reality, these extremes are hard to find anywhere at all - except maybe ... in the semi-obselete but classic theory of Psychoanalysis by Sigmund Freud.
Wrote Majaz at 4:33:00 PM

hey i watched this documentary u r talking abt iran on bbc world some days back...n i can just say that its yet another propaganda being crated about Iran by the west;possibly coz iran is the only muslim nation tht has the courage to treat these americans as they deserve n we can not even understate the strong vested interest of the US tht they hav in iran coz of its oil n resoucesetc.i just hoped after watchin the documentary tht iranian media shud respond to it n give them a fair viw of how women r treated in islam or in iran per se!

That was almost exactly my problem. Every time BBC or CNN or FOX wants to make a 'documentary' which is supposed to be an objective point of view to the maximum, they create something so foolishly lopsided, I can only HOPE and pray that people don't get duped by it that easily.

Having said that, I must emphasize on Muslim authorities and nations to do something about countering these attacks. We can't just remain sitting ducks forever.