Who are we to judge the Pakistani Psycho.

Sometimes I wonder if we're way too influenced by the media and it's galore. It's need for drama and it's persistent doomsday conspiracy theories. Are we so absorbed by this hyperreality that we have forgotten what it was to have an objective opinion?

Right now, it's certainly a dilemma for me as I browse through the statements of President Extraordinaire, Mr. Asif Ali Zardari.

"I mean business," he says, says he to Roger Cohen. He says he is changing things, replacing ISI bigshots, hugging Manmohan Singh, creating 'Friends for Pakistan', establishing a hardline on the US attacks and lashing out at them directly and simply at the UN meet. So what if he also flirted with the US VP. Pretty much all of America is calling her sexy. Why aren't we just glad he didn't use those words too while he was grinning there like Moose in front of Midge? 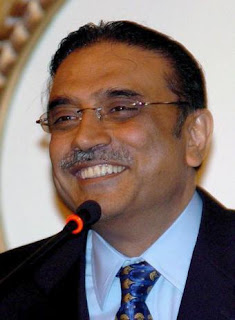 Whatever the case may be with his big grin and oily hair, I want to give him credit for saying what he did.

"Unilateral actions of great powers should not inflame the passion of allies."

You have to hand it to the guy. After the day you flirt with the US VP, stand next to Condi Rice and say that the world is a safer place because of President Bush, to go out and say you won't tolerate any more crap coming from the NATO helicopters on Paki soil - I'm impressed.

Cohen states what he feels about this as such:

"My impression? This guy's very smart, a wheeler-dealer in an area full of them, secular, pro-American, committed to democracy, determined and brave. I never heard Musharraf frame Pakistan's fight against terrorism with such candor."

For an analysis of Asif Ali Zardari, it is more critical who he 'befriends' internationally than who he sleeps with confidentially. It is probably more of a joke that he swooned over Palin if he continues to keep his head in his place in places like the UN meets and at 10 Downing Street.

The guy's a sleazebag, sure. He's probably not even a seasoned democrat. But he's got what it takes to take the seat. He did what it took him to elbow out a far more seasoned democrat than he was (hint, hint, he's far from the running now), capture the loyalties of JUI in one day, pocket the England-executed party of Pakistan and successfully stand in front of the international community, humbly asking for help.

How he's doing it is beyond me. What I do understand is that he's latched on good and strong. And when it comes to Pakistani democratic olympics - that's what makes you a winner.
Wrote Majaz at 7:45:00 PM

Did you see this:

To how he does it... A little something from a lecture in Marketing Management.

You know of Maslow's Hierarchy of needs yes? The hopeful theory is that, he has quenched his thirst for all the lower need levels, over-done himself with them in fact, and maybe now he is actually going towards the satisfaction of the needs for 'self -esteem' and 'self actualization'.

Ah well, one can always hope!

Haha, Hufsa, yeah I saw it. I don't know whether it's true or not. He's an ass but his English isn't that horrible. Some people have even said that this document was fabricated.

Zarmina, that's the most optimistic application of Maslow's theory I've ever heard.

But yeah I guess yuo're right in a way. What do Pakistanis have except hope.

Majaz, is it you?
writing this piece?

Why yes, Mampi. Who else?

he's a clever bleep. sure is. but clever for his own good. not for people's good. certainly not favorable given the position he is in. :)

These clever bleeps make it to the end. I'm hoping his rise to power can have some, if any, benefit to Pakistan while he's at it.