Teaching is an odd experience. Most people who look at a twenty-five-year-old fresh graduate think it's oh-all-that for her, but she will tell you, that on most days ... it's just plain odd.

Firstly, people don't give you way to pass when you're in a hurry to get to class. Most of them consider you yet another youngling in the halls of younglings rushing to get a good backseat in the room. It's not until you run into ex-students who start stepping aside, which tells other students that it's a faculty member.

Secondly, respect comes with a price. In the over-one-year that I've taught, I've had to 'endure' as Alfred says to Bruce Wayne (yes, the Dark Knight has gotten to my head), many rumors and impressions of me such as "Dragon Lady", "Miss Strict" etc. The rest of the rumors aren't worth mentioning because most of the deranged population of my university isn't exactly high-ranking on the creative lot. But they'll get there, I hope. Soon.

Some colleagues advised me to go to the university picnic at Nathia Gali Beach so I could 'bond' with the students. I didn't really find that fascinating. I'm old-fashioned and quite probably born in the wrong century, so a beach with a DeeJay and crazy boys and girls jamming in the sun isn't my idea of fun. I politely declined, encrusting the nicknames, heightening the grievances of the minions of Satan.

My class is dead-quiet and most students are shit-scared of me. It's like a court-room drama. I don't blame the little humans for hating me, I suck the fun out of their frolicking. I'm focused on delivering the lecture, making sure people understood them and discussing latest political affairs, rather than Atif Aslam and SRK.

But that was Sociology and Psychology. When I began teaching Oral Communication this fall, I had to reach out to the kids on a more personal level. I had to bring them to an understanding of who I was and how I did things. Moreover, OC is a hands-on course. It's got plenty of talking, jabbering, discussing and joking around. Activities include skits, parodies, plays, songs, etc, so it's got a big fun element to it. Thus when I walked into the first class of OC, students actually stared at each other, flipping through their time tables if they had their periods marked out right. Miss MA.? Teaching OC?

So I began straightshooting. After I'd taken the attendance, I asked,

"Who's surprised to see me here?"

And needless to say, countless hands shot up in the air.

I began explaining to them how things worked with more serious subjects such as Sociology and Psychology and how a teacher needs to have a firm hand if he/she has any desire to complete the course. Things began going well and from some I heard, in the later weeks, that M. A. was a fun teacher.


People who know me personally abet that I'm a big ball of bubbles most of the time. It being a revelation for my students lead to me hearing a lot of interesting quotes and statements.

One of them I'd like to share with everyone at which I could not help suppress my laughter.

In today's assignment "Carte Blanche" in which students were asked to talk about anything they wanted, with no holds barred, a kid came forward and said the following,


"I want to talk about change. I'll use an effective example. Last semester we had a teacher who taught us Sociology."

He glances meaningfully at me.

"Oh it was you, right! So anyway, she came into the class - and it was hell. It was so quiet. It was like almost scary. In fact - she was so scary that ... ah, well, how many of you have read Harry Potter? ... Okay, well, she was just like Professor Snape. A Lady Professor Snape. But things changed after the midterm. I guess she was happier because pretty much all of us failed it. But now I see a change that she's brought now that she's teaching us OC."


He went on talking about what he'd learned from life about change etc. And I kept seeing myself in the eyes of students. 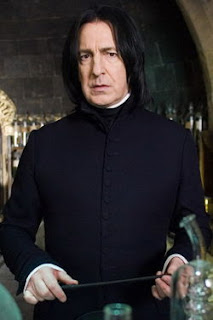 At the end of the Potter books, I began to thoroughly love the character, so I don't really think I was offended. Plus public opinion matters but little when it comes to doing the job right. I find it inconsequential most of the times. Overrated and negligible, especially when it comes to something I thoroughly believe in. And I thoroughly believed in delivering my lecture on time, covering my course targets, and challenging the students' capabilities in my course. It would have been actually quite the easier path had I chosen to let the students run loose in the classrooms like Cornish Pixies and act like Lockhart but my choices were clear before me. I know they hated me for keeping them quiet (and they probably still do, regardless of all the fun assignments I make them do now - students don't let go of impressions that easy), I know they hated me for failing them on substandard papers, I know they dreaded my class and I know they looked at me wishing I'd drop dead.

But I believe - and thoroughly - that when a time will come for them to understand something from a sociological or psychological perspective they'll look back at what they learnt and not what they hated about me.

And that's all that matters.

If they call me Snape in the bargain, I'm okay with that.

filed under Quotations and References, Ruminations

Now had he called you Umbridge, you should have failed him, his aenda ki saat naslain and killed his dog to boot.

And THEN sent his report card to his parents.

You are lying.
I m sure they drop dead at the sight of the gorgeous lady entering the class and flunk.
BTW woh MY Fair Lady ka kya bana?

That's not a bad plan. Too bad my kids won't know Umbridge since they're too infested with Himesh songs, but if someone manages to cross me ... I'd do that. I'd seriously do that.

Bann rahi hai My Fair Lady. Insha'Allah jald hi you will receive a ticket to attend it. ;)

I love both these characters, by the way. Snape and Lupin.

And Dragon Lady ain't that bad a nickname too. At least it's better than "amman Tallo mein pakao, hamein sehat-mand banao" (which was the unanimous title suggested by my Matric class for our Pakistan Studies teacher. We never got around to announce it publicly, which was a good thing now that I look at it. She really was a wonderful teacher.)

Just remembered... have you read the Harry Potter prequel? (Wikipedia)

Snapes... I think McGonagal would have been a more apt association...strict, but not unfair, and classy.

But then, that's my opinion. The kid was rightly entitled to his own.

Nathia Gali is this really exclusive beach in Karachi as well. Supposedly very beautiful. Perhaps that is why they honored it with that name.

But I suppose that boy didn't want to flatter me too much, lol.

Having said that, students can be mean bastards though.

Do your students read your blog? :P

OC was a fun course. Our teacher made us do all kinds of retarded things...

I'm trying to do just as retarded things with my own kids, Farooq.