I have been forced to confess it herewith.

I do not get it. Maybe men have same issues with oestrogen and progesterone, but come on. Progesterone isn't half the confusion as testosterone is.

Testosterone is so incredibly funny, it'll make nice, decent, intelligent people like my own darling brother, Ali, scream uncontrollably at a guy who merely cut in front of him at the CNG station a couple of days ago.

While waiting for the ATM machine to work and observing the milling-arounders, one does get to notice interesting (and sometimes just plain gross) tidbits. For example. 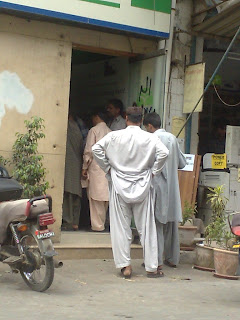 Where the bloody hell does he think he's standing? His washroom, waiting for his kids to finish toothbrushing?

On roads where women walk like this, all covered and sour-faced ... : 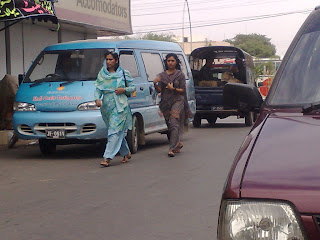 Men actually have the nerve to stand around their hands up their waists through their kurtas. Like so. Notice it's not one but two intelligent species standing that way. 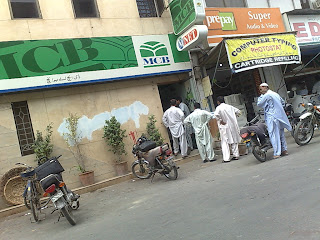 But no wait. Where there's disgusting, there's Zardari. And no one can refute he's not a good reason to be baffled at testosterone. Everyone's heard of his fawning over Sarah Palin. If I'm over the fact that we're slobbering as slavish puppies at the hands of the American government, I'm made to see him making sleazy innuendos at a remotely attractive female.

Your wife's been dead not a year and you're already grinning like a chipmunk.

I guess I should've taken the hint when you took over the party and ran for President, but you had to prove it to me, sir, eh? 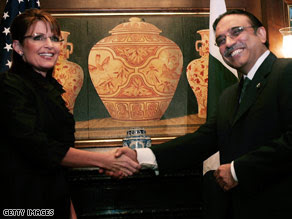 And although I hate to use anything human in the same line as Zardari, I have to make an exception.

Then there are freaks who will insist on flirting with you despite your obvious display of the ring-finger. The freaks who think anything moving and female is worthy of their slimy attention. The freaks with their mad stares and creepy smile. Their bad teeth and slick (in their opinion, anyway) hairdos - do you actually think you're attractive if I see your knickers hanging out your pants? We're not blind, please. Or devoid of other senses either.

I'm sure the grievances are equal on the other side, the battle of the sexes will reign, never the twain shall meet, opposites will continue to attract, and so on and so forth ...

... but if it ever comes down to choices, I'd always choose oestrogen.

It's crazy, moody and maybe even bitchy at times.

You may not but plenty of women do. And for every guy with his hands up his kurta or down his shalwar there is a woman strutting her wares like she is the Sunday bazaar. Its not about the gender as much as about awareness of social etiquette. And as for Zardari well, his lack of social grace is the least of our concerns he's a retarded murderer, his hitting on Palin isn't merely a faux pas, murdering his wife though, now that's messed up.

Oh come on. Are you telling me that women have the capacity to flirt more than men?

Call it social etiquette, call it gender awareness, call it hormones, call it whatever you want. In real life, you'll get to hear more 'men-are-pigs' than you'll ever get to hear 'women-are-pigsies'.

Human beings aren't easy as a rule. But do you have to deliberately make things worse by being so bloody stupid?

OK, Benighted, ever seen a woman pissing in public?
Men make such a show of it, as if they are gracing the walls with their body fluids...
Phew

you know what i think? testosterone also has this side-effect called the 'I-am God' complex. this syndrome causes the sufferer to believe he is superior to all other species and thus has the right to be judgmental and prejudiced against them all, but especially females.

See, they can go around wearing indecently tight shirts and jeans that start below their knees, but react shadeedly when they see a woman pass by who is not wearing a dupatta.

Similarly, they consider it their birthright to x-ray any girl they see walk by; and when a woman complains, they blame it on her for dressing provocatively. {Yes, we totally stare our eyes at your underwear. It's just so frickn HAWT.}

Now if that's not having your cake and eating it too, i don't know what is.

Actually Mahw, testosterone is the more useful hormone. We women should inject ourselves with it once in a while.

lol @ Hira's comment on 'I-am God' complex
waise bhi, they just dont stare and be judgemental abt women not wearing a dupatta, they'd do that even with the ones who are covered from head to toe...and its not uncommon to hear comments like 'burqe wali zada kharab hoti hain'.

I'd love to but I don't think I'd want to make a pass at anything that has hair and two legs.

That's their way of rationalizing their own x-ray vision!

you know my favorite bit of testosterone-pana? This:

'A man is like a piece of gold and woman a piece of silk. If you drop gold into the mud you can polish it clean, but if you drop silk into mud, it's stained forever.'

said by some tribal guy but Jeezus, where do they come up with these?

oh YAY! I've unwittingly stepped on the toes of women the world over yet again :)
But you know what? I hate men myself. At least the assholes who have given the entire species a bad name. I try to be as civilized as humanly possible, which includes not pissing in the streets, making sure the rare beautiful woman i find worthy of introducing myself to isn't grossed out and/or frightened by me, wearing more clothes than most women do these days when i go out, etc etc, but to no avail. Makes me wonder why i bother, i already have the label, might as well live up to it. But then i remind myself that if i let this tendency women possess of generalizing things hamper my resolve i'd become zardari.
My humble request, please don't lose faith in men altogether, don't condemn the entire species because of the few bad eggs rotting up the barrel. And try to practive what you preach, you know, i'm sure none of the women who have commented here are hypocrites but there are plenty of women out there who are, just don't turn into them.
I've been more grossed out by women and their capacity to 'hit' on men for reasons much more malicious than physical attraction so if you think women aren't capable of being pigsies, you are sadly mistaken and blissfully ignorant, women can be much much uglier than thier generally pretty selves. Whether its uglier than a man can be or not is a matter of personal experience i guess, but as far as i can tell there are pretty much equals in the department of being messed up.
And Mampi, as a matter of fact i have and it was as gross a sight, if not grosser, as a man decorating walls with his fluids. But see instead of using that incident to condemn women altogether, i chose to ignore it as an indication of what the lack of sanity and or awareness can lead a person to do. A human being, not a man or a woman, but a human being, which is ultimately what we all are if we bother to look at things with a perspective broader than our sexist tendencies permit for it to be.

Okay, so this is fresh. Beknighted comes in with his urbane version of testosterone in which he tries to defend the messier sex with dignified poondi and semi-decent clothing.

Alright I'll give you that. Some men have got style and some (read most) men don't.

But that doesn't deprive you of testosterone in any way. You may have controlled the beast, but it is in no way dead, dude. It's just purring when you think you've calmed it a bit.

You talk about the issue of sexism pertaining to women-seeing-men-as-filthy but take into consideration that this isn't exactly utopia and we're not Plato's cheleys. We're actually really honestly totally appreciating the truth of the gender divide which has been forever studied - and will continue to be studied - because yes, I do agree, their is a considerable (read GREAT) difference between a man and a woman. The habits, the nature, the propensities of the soul - they're extremely different. My own better half will abet to the tendencies women have and men don't. So will I.

We're all different and gender adds a big degree to it.

I haven't lost faith in men, I just find them filthy and disgusting and will not waste any opportunity to make sure they know that - hard as that may be since their God complex only seems to be getting better and better with time.

I love that quote. At least it doesn't compare you to a piece of glass and make you seem completely incapable of taking care of yourself.

Too much hate, M, way too much.

Ali screamed at the guy? I only honk the horn in such cases.

I am such a disappointment.

I'm responding. You know as well as I do you'd hate the quiet sufferers even more.

Yeah he did. And I'm still mad at him for it. That is no way to behave. Honking would've been the right course, imho.