The desert begins and akin to it, begins the journey of two lovers set in the Sahara. The story however begins much before it.

The English Patient is the burn victim of a plane crash. He has vague memory of who he is and what has happened to him. His scars do not tell his story, as most scars do; in fact they have vanished for him any traces of his past, any recollections whatsoever. One act that does not leave him - is that he hums. Constantly. 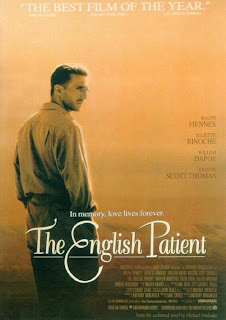 The film swings back and forth through the flashbacks of Count Laszlo de Almasy, under the care of a devoted, passionate nurse, Hana, played by Juliette Binoche in her Oscar-winning role. Most understandably so. Binoche's bohemian, careless-yet-careful portrayal is heartwarming and sensitive. It caters to the senses as she tries to find beauty and solace and hope in the arms of war and plunder, serving to a burn victim in an abandoned monastery.

It's a sad, romantic little love story with a cast so stellar and performances so solid that despite the slightly mindnumbing length of the movie, you'll find yourself riveted.

But only if you're not used to happily-ever-afters.

Because believe it or not - they don't have to happen for every single one of us.
Wrote Majaz at 1:19:00 AM