I want my spaceship. 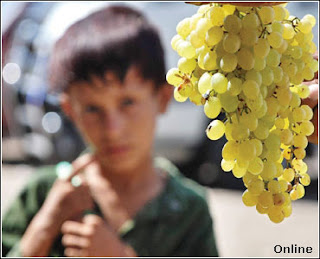 From Dawn.com
I want to follow suit of that big ship that deserted earth because it had become unlivable. It was home and it was unlivable. Tell me if that isn't torture enough and I'll tell you to inform me of what is not painfully obsolete.
The reasons are simple.
US is this close to a full-fledged war-on-terror in Pakistan. One wrong move and we're really looking at another 6 years of US's pathetic excuse for "counter-terrorism". Indeed. Millions of dollars, thousands of dead soldiers and women and children later, the US appetite of saving mankind from itself is still not satiated. How many more, I ask you? How many more to fill this oil-black-hole?
Another couple of billion dollars spent on atomic experiments. How about feeding people with all that money for a change? Help a kid get his eyesight back? Educate a couple of hundred beggars? Give blood transfusions to teenagers who might end up saving families in the future, if they can just have a better chance at life?
12 killed in Taraveeh prayers. Taraveeh prayers. Including children. Who are these human beings and what has gotten into them? But there. I cannot allow myself to ask these questions just as yet. Not when I have the following fascinating factoids outlined.
A teacher throws acid on a student's face. Acid. Saas and bahu suna tha. Teachers and students? And if that isn't bad enough for you to start saving for your ticket outta Planet Doom, hear this. Son kills 60-year-old mother declaring her kari. Kari. Your sixty year old mother.
But women deserve no sympathy. I'm almost mysogynistic after hearing about Ms. Gulzaran aka Bilo who claimed that the boy with the fractured hand that the police recovered was her son. The boy, Dilawar, 8, reports that he is not her son. He was kidnapped from Karachi and Ms. Gulzaran broke his hand with a hammer and forced him to beg. A hammer. An eight year old kid and a hammer to break his hand for petty cash.
And we are busy playing dosti-kut'ti, dosti-kut'ti. We're too busy fighting petty politics when we really ... and I mean REALLY ... need politicians who are as selfish about the nation as the US is about its foreign policy. We need the media to act responsibly and stop berating Pakistan for things we already know and get a move on already. If they can't do anything positive except to shake fingers and talk crap about problems we already know are there, then they should just shut their pieholes. If politicians can't just stop bickering then they don't deserve to be Presidents. If people like us can't take initiatives to do something about the environment, about the social dilapidation that is spreading like wildfire, we need to take a good look in that mirror and ask ourselves (f*** the fear of cliches) if this is the world we want our kids to live in twenty years from now.
I don't know how we do it and I don't care where we start. Let's just embark on this journey already before things get any worse than they already are. I'm in no illusion of removing world poverty but if I give in to disaster, that's probably just as stupid.
Do what you can. Plant a tree, feed a child, write a blog, report a crime, speak the truth, teach the alphabet, keep the faith, love the land.
The point is ... do ... because if this isn't heydey ... I don't know what the freaking hell is.
Wrote Majaz at 9:13:00 PM

What a co-incidence Majaz. I had a class test in one of my classes today and I just told them to shut their notebooks and asked them to talk to me on Female Foeticide. It was an all boys class.
They were mum, but I know they will speak. We will make a difference, we will make em speak.
Amen.
It is one hell of a great post. Reach out. Cry. Go on.

We've all gotta do it together, Mampi.

What we can manage at least...

"Try to obtain a foreign nationality. Be it USA, Canada, or a country in the EU. Because, trust me, you wouldn't want to listen to your children saying, 'This is the country where you brought us up and where you want us to build our future? A country with no electricity, food, and water, and no system?' "

These were the words of a teacher of mine, and he wasn't joking when he was saying them. I disagreed with him at that time, but I am not too sure now. I am just standing at zero and hoping -- desperately hoping -- to go back to the positives, instead of being dragged into the negatives.

My teacher also jokingly used to say that we are technically Pakistani nationals, but logically citizens of the United States.

But yes, doing what we can is what we need to do now. Even if the survival instinct wants us to flee.

I've been of the same opinion lately. A foreign nationality and its joys don't sound that unappealing to me now that I see a nuclear-armed state being handed to a man like Zardari. But believe me, my kids will grow up here. There's nowhere else I'd want them to be when they're 12 or 18 or 81.

I do wonder what will become of Pakistan. I do think about my future and the future of my kids .... what happens if something happens to this country? The people responsible to take care of it are throwing it down the garbage disposal and all people like yuo and me can do is watch in horror.

So I do wonder and I do think of contingency plans. But until it's the dreadfullest of times to leave and go to eventual third-grade-citizenship-hell, I'd live here. Even in all the long hours of electricity failures ... I've never once considered leaving Pakistan. People tell me I'm lucky I'll be moving from here soon ... I just wish if people could pray. Just pray things go fine.

After Zardari becoming the president of Pakistan things can only become worse instead of getting any better..alteast I can't see that happening in the near future but lets hope I am wrong!
Tough times are coming up majaz..we've to make some bold decisions & we've to stand by them..lets hope we do otherwise we'd be all doomed!

I'm hoping you're wrong too.

We've been praying for too long majaz though i wonder why our prayers haven't been answered by now..like always we're waiting for things to happen but like i said we've to stand up & to make some bold decisions..some tough decisions..we need a leader..a revolution which could change the course of this country to a better one..we're desperately in need of ONE goddamn honest & devoted leader who could make things happen..if we could unite & be together maybe then things could become better as at the moment its chaos everywhere..we're divided & being torn apart..I wonder how worse could it get!

I think we're way past the need-one-leader. The system is so unbelievably corrupt, so decidedly seeped into the piths of selfishness and immorality, that it seems highly impossible that one great man can do the trick. What can ultimately be thought of as some sort of a solution is the power of the people. Through education and literacy can the problems gradually alleviate. Poverty eradication is also a key agenda. But the truth is that a big section of our decision makers are just not interested in making this place any different than it already is.

And until these key decision makers decide to collectively revamp the country, we're stuck hoping. STUCK.

You're right but its us,we the nation who has given them the authority to make these decisions..we elect them & nominate them..we've been so wrong whilst making decisions & by re-electing the same ol' corrupt politicians over & over again..we can bring the change by voting for the right people & by taking collective steps to address these problems..its now or never majaz..now or never!

Actually it's not us. It's a big chunk of people who don't give a damn about the masses who make the decisions. They are the powerful leaders who sway the masses with the swing of their words and the deep influences that they have in the political and social spheres. It's not just about you and me anymore. Because look at it. The educated, the think tanks, they've all hated Zardari for so long. But to no avail.

This isn't about us anymore, and that's what scares me the most. Even the intelligent, discerning man is as helpless as the homeless vagabond.

Poignant. As a writer, I believe you have done your duty with this post. More writers need to write hundreds more of such posts and back them all up with their actions - just like you said, DO something.

Our biggest enemy is our own silence, our own incomprehensible capacity to take it all lying down as a nation.

On a side note, teachers like the one Saadat mentioned need to be sought out and removed from those very responsible posts on war footing - they are the GEO of education system, predictors of doom, crying hoarse for all to abandon ship rather than implore them to help steady it.

The only time anything chipped at my hope was when years ago I had heard one of my own classmates planning to be corrupt when he grew up. He is with the air force today, and it makes me wonder about so many things. Did he change along the way? I keep hoping he did. If he did, it could only have been for the better.

I am appalled and disgusted by all who have been airing doubts about the stability of the country for the past four or five years. The country might be in turmoil today, but it is still very much a country DESPITE those people, and in that alone I find so much hope.

Planning to be corrupt?