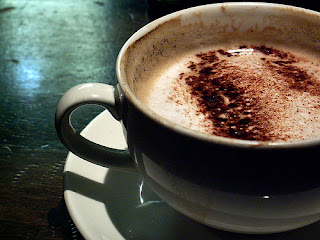 When most women of your age are concerned with latest Portia designs (not that I have anything against clothes or fashion), latest Star Plus happenings (I do have a grudge against Star Plus watchers), and what Mrs. X said in response to Mrs. Y's spiteful comment (let's not even go there), it's hard enough to find someone who actually gives a damn about what's happening in the world, someone who watches news and has views about them, and especially someone who's managed to gain an insightful, critical yet non-wannabe-ish, perspective about the lengthy and convoluted details of history. I pay my respects to the demise of common sense in women. We're really helping nature in going down the phylogenetic scale of intelligence.

Reja is not someone I had thought I would meet after DHA ended, let alone having coffee with for two hours and enjoying every bit of it. In a nutshell, our interests collided when we both ended up giving our English Literature exams. Last year sent her off to England after she tied the knot and while she is visiting here again - we got to catch up over a mug of coffee and hot chocolate and one of the most terrible-tasting Tiramisu ever.

What is great about chatting with a friend, apart from the fact that they're your friend, is the fact that they start talking and discussing the same things you've probably debated in your head for long. And when you finally have the chance to hear and have the discourse about them ... it gives you not only a sense of perspective, but a satisfaction of thought and self.

Especially for Pakistani women who like their coffees without Star Plus or a drastic dash of hedonism.

And of course. Without awful-tasting Tiramisu.
Wrote Majaz at 7:51:00 PM