"Life in a Metro" 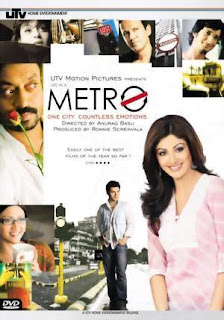 Directed by Anurag Basu, this multi-starrer Bollywood flick has plenty of good points. Good performances by many of the actors. Strong dialog and a well-linked plot. But.

Yes. The critical word. Which must not be spared.

After Kabhi Alvida Na Kehna "Life in a Metro" comes as yet another lesson in marital relationships. If you find yourself out of love in marriage after ten years - it is considered a-okay to find love elsewhere and rationalize it quite, quite thoroughly.

Honestly, where'd all the good ol' screamin', shoutin', yellin', overdramatic dames that would climb volcanoes and drink lava for their 'suhaag' go? Hello, ten years, and we're looking at slimmer, prettier, more camera and sound-friendly heroines that are easy on the eyes and pretty slick on the conscience.

As a mode of freedom of expression, films and television should be granted freedom to produce ideas and to encourage public opinion. As an agent of socialization, Media has a great responsibility to show what the society truly is. Bring them both together and films like "Life in a Metro" start with depression and end with a hurried tie of keeping an orthodox audience happy and a savvy save from the rush of critics. The woman turns around and goes back to her husband. Yippee. The over-achiever, conscience-less dude goes back to his roots. The pessimist finds a guy she can fall in love with to be completely against profile of the man of her dreams. And the orchestra rings true to the pitter patter of rain. Romantic, bluffing, social awareness, who knows, but hey. It's life in a metro and we're all trying to be understanding intellectuals here, so let's accept what the boob tube is telling us and forget about the functionality of social institutions, an alternative view of faith and loyalty (which doesn't always have to be about a Valentine's Day flower or an anniversary), and the fact that if your wife nags you - that does NOT give you the license to go bang another temp at the office.

But. Who am I to say. After all. Millions of people must have seen this movie - and 99 percent must have taken with them what I hated about this film.
Wrote Majaz at 4:04:00 AM

The two tracks I really hated within the movie was the Kaykay/Shilpa Shetty/Shiny Ahuja one and the Nafisa Ali/Dharmendra one.

Irfan Khan and Konkona Sen Sharma were awesome, though.

They're both great actors. And yeah. I forwarded the hammy parts too.