The good news is, Hrithik Roshan has managed to salvage some dignity in a skirt. And dancing in it, sufi-style. The bad news is, Aishwerya Rai hits yet another case of 'fine feathers', fails to impress with her acting skills yet again and only manages to make a slightly indelible impression because of the awesomeness of her tawdry finery.

Ashutosh Gowariker's direction is the only uncontested winner in the movie, Jodhaa Akbar, the whole set up is as dramatic as Indian movies go. However, the increased quality of performance and production design, that was very paramount to a movie with a storyline such as this (imagine Akbar's court and fights taking place in a studio!), has helped the movie be appreciated. One begins to understand that there exist further talented beings than the likes of Malika Sharawat and Himesh Reshammiya in Bollywood.

Since I am neither a historian nor an expert on Mughal rule, it is impossible for me to critically evaluate the accuracy of the director's description of the 'epic love story'; nevertheless, I shall give it benefit of the doubt of being a fictitious creation/interpretation for the sake of cinema - where people like to be told what they want to hear, see what they like to imagine and experience what they can only wish for. 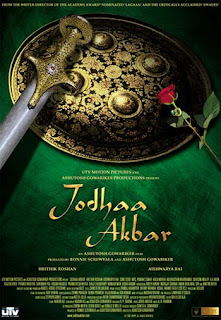 So, if you're a fan of semi-epic movies in general, like to spend some 3.21 hours indulging in eye candy that is Hrithik Roshan and Ashwerya Rai, you'll probably enjoy it. Don't place your faith in the movie itself, though. That's almost never a good idea when it comes to Bollywood. Dream merchants is what they are.
Wrote Majaz at 2:22:00 PM

"The good news is, Hrithik Roshan has managed to salvage some dignity in a skirt. And dancing in it, sufi-style."