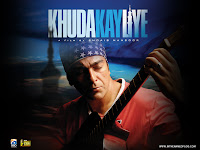 The talk of the town 6 months ago, the movie "Khuda Ke Liye" has been something of a breakthrough in Pakistani cinema. Comforting facts regarding the movie included that one could sit and enjoy an Urdu movie without having the need to regurtitate at disorienting thumkas, latkas and jhatkas. That scenes automatically didn't cut from the heroine running away to the father finding the her with the hero, prancing around in a fancy dress. That characters were talking in normal human hearing intensities, and not at the pitch of thunder. And that the humor wasn't cheesy or ridiculously lame - but actually funny.

Discomforting facts: Iman Ali's British accent, for one thing. And the fact that she cannot act. And that Shoaib Mansoor should have completed the whole blend of the movie with a much superior actress who could have done more justice to the role than Iman Ali. All I could see in Iman, while she was trapped in Afghanistan/Waziristan was pretty-girl-in-ugly-shoes. There was a lot more to the character that could have been established, but I'm afraid Iman just wasted it all on looking fantabulous.

Fawad seems to fit the nervous role of the conflicted Sarmad. It could have been probably a case of art imitating life (or vice versa) as his possible lack of talent translated into a surplus of it. The role he plays is of a boy who's confused and bewildered and scared, even though he knows his head is already in hot water. Which is probably what Fawad felt when he must have been shooting for the movie - offscreen.

Flimsy Editing. Even amateurs could see the flaws there. The moulana stereotyping. The length of the movie (too long!) and that Iman Ali could run through the valley of Afghanistan/Waziristan with such gusto - and then return to it with the decision of educating the young girls. Admirable sentiments. Poorly reflected on a role like hers.

Overall, the film is a good watch. I have no hopes for Pakistani cinema nevertheless. Pakistani people would rather enjoy the comfort of their homes to watch an exceptionally great movie. They only go to cinema when there's pretty much nothing else to do - which hasn't happened yet for us, thank God - or if there's a movie which hasn't been out on DVD as yet. Which was my case in Khuda Ke Liye. I would not have spent 300 rupees to go and see it in a bigger screen when I could have enjoyed it at home just the same. Bigger screen didn't turn Iman Ali into Cate Blanchett, nor did it make me believe truly that music is something that can be as easily settled in a matter of movie dialogues. There's room for plenty more arguments which I feel have been neglected because of the director's personal opinion on the matter.

What was impressive about the storyline was how misinterpretations occur everywhere. How no system is safe from human error. How we all tend to sometimes forget that humanity comes in first and foremost and that there is no way any religion or government could allow people to be treated the way they are treated in the case of the oppressed women in Afghanistan, the labeled Pakistanis and Muslims in the United States, the prisoners of Abu Gharaib jail and the so-called free-thinking Americans politicians, diplomats and any other person who thinks that combating terrorism means to encourage more terrorism.

Go watch it if you haven't. Don't know about the revival of cinema. But it'll make you think for a while.
Wrote Majaz at 9:13:00 AM