An Ode to David Cook.

I really honestly don't care if I sound like a headless teenager, I don't care if there's enough controversy to make American Idol seem more-scripted-less-live a show, I don't care if it isn't politically correct for psychologists and sensible young women to enjoy these shows, I don't care if people think I'm being over emotional (I bravely confess that I cried when Amber died on House's finale) but I did cry over the announcement of Cook's final win (I've been up all night trying to make it to 6 o clock to watch the show) and I don't care if all these things make me look 8 and it makes people doubt the things I write here henceforth. It was never about you people anyway. It is about me, me, me and me is on a high right now, as Hufsa says. I don't even care that I've taken a quantum leap into hyper reality that I've always found myself deeply aware of.

After all is said and done.

We all have our guilty pleasures.

And. This is mine.

I am totally and absolutely ecstatic that this guy won. After repeated idiocies like Taylor Hicks, Jordin Sparks, Fantasia and kicking off Daughtry, American Idol FINALLY gets something right.

The guy's brother's got brain cancer, he's never responded to Simon in the girly way most contestants do (hint = Danny Noriega and Sanjaya whatever) and he's got more grace than most of the people I've witnessed on the show, has got that mesmerizing huskiness in his songs and is now, much thankfully - your American Idol.

Here's an interesting link and a hitting-home perspective on the finale. 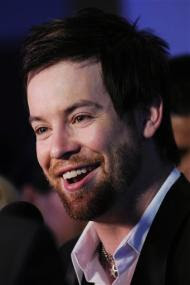 LOL!!
Guess he got you cooked for a good reason! lol
"oh a high" what? lol
I forgot what I said :S
lol
ahaha... true, there are better pictures of him!
But yes,
Congratulations, at the end of the day, the winner does deserve it. No matter what the situation :)
So, Congrats COOK! :D

You can look forever...you never WILL find a better picture of him. Or a better singer than Archuleta that was on this Season of Idol.
So what if he got 12 million more votes??? Archuleta sings WAYYY better and watch...in a few years Archuleta will be rocking with 500 better albums. Than David COOK..poor dude..stuck with the stuck up idol producers...THEY'RE HARSH!

[typed up and from Faiza]

Yeah, you said "I can imagine you must be on a real high right now"...

And I continue to say that Cook rocks!

Yes, I could surmise as much that it's Faiza is commenting.. :P

And come onnnnn you KNOW Cook's the looker!!!!

Cook's winning almost(but not quite) makes up for Bo Bice's losing the finals in 2005 and Daughtry being kicked out so early. Finally, America shows it has some taste.

i hate this word verification thing. what do they think i am? American?

you said it, hira! It makes up for it. Almost!! Next step: Obama!

Haha , not only that even simon apologized and he later admitted that it was not a knock out but a draw. I liked the other David too but I am glad he didn't win, I know how Hollywood manipulates people a, one day you are a hero the other day your nude pictures are everywhere .

Yeah exactly. That's another reason why I felt Archie wasn't too much of a possibility in that world. Being 17 worked for Jordin Sparks since she resembled a heavy weight champion, maybe, but for Archie's candid and open smiles and John-Lennon idealism, he'd end up in the madhouse in less than a year. Or probably disappear after one album into the forest somewhere.