"The Color of Money"

And then there is that one actor no one can take their eyes off of.

Shocking as it may sound, I am not and sincerely not referring to Tom Cruise. If you ask me, he's one of Hollywood's overrated stars and if he jumps on a couch, it just doesn't make him any more interesting.

I am actually referring to the legend, Paul Newman. If there's anyone who can parallel Brando and Peck in grace or DeNiro and Redford in artistic achievement, it's this guy right here. In this 1986 flick, he's got more poise and gallantry at 61 than most men do at 30. Tom Cruise was aptly chosen by Scorsese to play the slightly goofy-but-talented pool savant in front of a seasoned liquor-seller (Newman). There is no way anyone could have managed looking better than Newman. 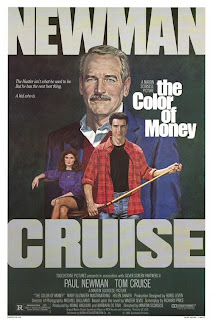 The plot of the movie is a treat for pool-lovers but for those of us who haven't been around a pool table apart from our Iphones or desktop games, this film is more than just 9 balls rolling around on the table. It explores characters deeper than pool-playing money-winners. Scorsese has this knack of humanising elements which are untouchable, elements that can only be viewed from afar. Although this humanising is done brutishly, not as elegantly as Coppola, it nevertheless breaches the divide between a luxury sedan driver and an average Joe or any of the streetside hoodlums you avoid gazes of.

A must-watch. A must-must-must watch. Newman is truly one of the finest actors Hollywood has ever had - and they are absolutely right to mourn his death.
Wrote Majaz at 4:02:00 AM

Did you watch 'The Hustler' before you saw 'The Color of Money'?

It's only then that the significance of Paul Newman's character hits you.

That's it. Now I have an inferiority complex when it comes to watching movies.

Can you imagine what it did to an impressionable 12 year old?

Nat, I'll be watching it soon. From Christopher Nolan-mania I have now jumped to Paul Newman-mania. And I know this will take a longer time to get over since Newman's anthology is much longer than Nolan's!

Saadat, go start watching it then! The best way to get over an inferiority complex is to beat the fear and become it.. :)

Hira, oh you must have been obsessed then ...