Bollywood is something you kind of have to develop a taste for.

If you haven't grown up in India or Pakistan, watching Salman Khan develop from a scrawny 20-year-old to a muscly 30-something, still chasing girls, tolerating 3-plus hours of female melodramatics, male stereotypes, the fight for good'n'evil, loving over-makeupped, under-dressed, under-dogged heroines, 5-minute dance numbers, familiar surnames to rank at the box office and the general hoopla that is associated with these films, you will have little understanding or appreciation to this cinema. For you to acknowledge how far Indian cinema has come, you have to watch this movie. 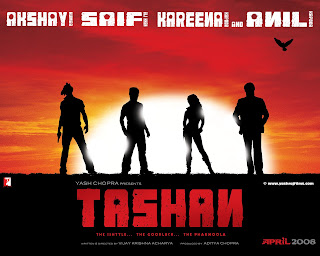 Starring Saif Ali Khan, Kareena Kapoor, Akshay Kumar and Anil Kapoor, comes the storyline and direction strongly reminiscent of Quentin Tarantino's flicks - or at least a wannabe Tarantino anyway. It does not boast to be made sense out of, it doesn't want you to think about society and its problems, and it doesn't want you to wonder why the hell does a vixen like Kareena shout for "Bacchhaaaaannnn!" when she so readily agreed to be water-hosed-down by the villain?

Why? Because the entire film, ladies and gentlemen, is about the fictitious reality of the very word tashan. To me the film held a lot of entertainment value when it came to the big brand of audience Indian cinema appeals to. Kareena looks great, Akshay's fighting Crouching-Tiger-Hidden-Dragon style, Saif is talking Pataudi-style, Anil Kapoor is really doing his bit with that broken English and you've got a beaty-meaty soundtrack. That's the very definition of what makes Indian movies click. That's what I admire about the movie. It was Tashan from the beginning to the end, make no mistake, no false promises of sensibilities from any point whatsoever (they should add that as a disclaimer to these entertainment-flicks).

Fun to watch, easy to forget, Bollywood a la classic. Go watch and pig out.
Wrote Majaz at 5:01:00 AM